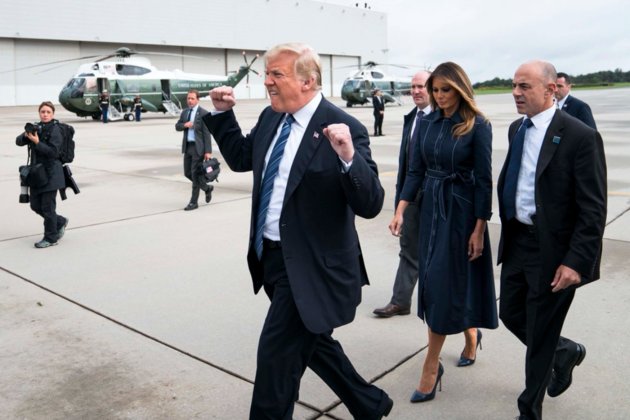 PENNSYLVANIA, U.S. - With controversy becoming a regular feature in the U.S. President Donald Trump's life and daily routine - his actions on Tuesday baffled some, and provoke many others.

Trump touched down in Pennsylvania on Tuesday and immediately sparked outrage as he greeted supporters at the Memorial Service by raising both fists in the air, clenching his jaw and delivering a bizarre and an unexplained gesture of triumph.

Journalists reporting on the President's activities through the day, immediately shared a photograph capturing the exact moment that Trump performed the triumphant double fist pump, as First Lady Melania Trump walks behind him with her head held low.

The photograph immediately went viral, with several people sharing it across social media pages and criticizing the President's conduct that came across as lacking empathy on a day marking the worst terrorist attack in American history.

One social media user pointed out that the president should be acting as consoler-in-chief, not celebrating.

The president's critics said the gesture showed Trump's "lack of respect" and an "inability to feel empathy for another person's loss."

One Twitter user wrote, "This is not an exclamation point day. This is not a fist pump day. You sully the solemnity of this day. History will not be kind to you. But we will #NeverForget #NeverForget those who lost their lives and those who gave so much to help so many on that day, and the days that came after."

Another person wrote, "Today we get a fist pump because Trump thinks ppl are there for him."

Adding, "What a rabbit hole we have gone down. Anyone that thinks this gesture doesn't show exactly who Trump really is, think again."

Another user wrote, "So the clueless, soulless phony-in-chief arrives on hallowed ground, attempting to portray a decent human being, and fails again. He defiles every space he inhabits. To those who lost loved ones on 9/11, we wish you peace and love."

Yet, despite the criticism, so far, Trump's jubilant gesture remains unexplained.

Many others were quick to point out that Trump began the 9/11 anniversary with an angry early morning tweet about Russia and Hillary Clinton.

Raging over 'collusion' and 'foreign spies' ahead of his visit to the Shanksville memorial visit,

Trump's early morning tweet appeared to be a quote taken from Fox News, which sought to perpetuate an argument that is often used by the President's supporters.

The argument seeks to shift focus from the investigation into his presidential campaign's links to Russia on to unfounded speculation around Clinton, the FBI and the DoJ.

Trump wrote, "'We have found nothing to show collusion between President Trump and Russia, absolutely zero, but every day we get more documentation showing collusion between the FBI & DOJ, the Hillary campaign, foreign spies & Russians, incredible' @SaraCarterDC @LouDobbs."

In a subsequent tweet, Trump retweeted his assistant Dan Scavino, with a picture of him signing an executive order designating "'Patriot Day 2018' to honor the memories of the nearly 3,000 lives lost on September 11, 2001," with the hashtags #NeverForget and #September11.

In another tweet, he launched a renewed attack on the FBI and the DoJ and accused the department of doing "nothing" to look into an alleged "media leak strategy" by two FBI agents that were investigating links between the Trump campaign and Russia.

Quoting one of his favourite Fox News presenters, Lou Dobbs, the U.S. President wrote,"Eric Holder could be running the Justice Department right now and it would be behaving no differently than it is."

Another pointed out, "Narcissists are terrible at mimicking appropriate emotions."

And another wrote, "There is no bottom to @realdonaldtrump's lack of respect and absence of empathy."

Another Twitter user wrote, "Donald Trump first marked the 17th anniversary of the 9/11 attacks with an angry morning tweet about Russia and Hillary Clinton. Now he's seen fist bumping on his way to the field in Shanksville, PA, where 40 people died after a terror attack was thwarted."

Ahead of Trump's speech at the memorial event, the White House press secretary Sarah Huckabee Sanders issued a statement saying the president's focus for the day was "remembering the lives that were lost, and certainly honoring the individuals who were not only lost that day, but also put their lives on the line to help in that process."

Before arriving in Pennsylvania, Trump tweeted, "17 years since September 11th!"

Then, in a subsequent tweet, Trump appreciated the "GREAT job" the former New York City mayor and his current private attorney Rudy Giuliani did during the attacks 17 years back.

Praising Giuliani, who was mayor of New York City at the time of the terrorist attacks, Trump wrote, "Rudy Giuliani did a GREAT job as Mayor of NYC during the period of September 11th. His leadership, bravery and skill must never be forgotten. Rudy is a TRUE WARRIOR!"

Declaring the 17th anniversary 'Patriot Day 2018,' Trump signed a proclamation on Tuesday, which read, "On Patriot Day, we honour the memories of the nearly 3,000 precious lives we lost on September 11, 2001, and every hero who has given their life since that day to protect our safety and our freedom."

It added, "We come together, today, to recall this timeless truth: When America is united, no force on earth can break us apart. Our values endure; our people thrive; our nation prevails; and the memory of our loved ones never fades."

At the memorial service, Trump paid respect to the fallen heroes of United Airlines Flight 93 - the California-bound commercial airliner which crashed as the 40 passengers and flight crew members thwarted a hijacking by a group of terrorists and attempted to regain control of the plane. Everyone on board the plane was killed.

On September 11, nearly 3,000 people died when other planes were flown into New York's World Trade Centre and the Pentagon.

The attack was planned by Al-Qaeda leader Osama bin Laden, who was killed nearly a decade later during a U.S. military operation ordered by former U.S. President Barack Obama in May 2011 .

In prepared remarks at the Pennsylvania field, where 44 people were killed, including 4 hijackers, Trump said, "This field is now a monument to American defiance. This memorial is now a message to the world: America will never, ever submit to tyranny."

He said the fallen had "joined the immortal ranks of American heroes," and added, "We honour their sacrifice by pledging to never flinch in the face of evil and to do whatever it takes to keep America safe."

Trump said, "They attacked the enemy. They fought until the very end. And they stopped the forces of terror and defeated this wicked, horrible, evil plan."

Trump continued, "Today all of America wraps up and joins together. We close our arms to help you shoulder your pain and to carry your great, great sorrow. Your tears are not shed alone, for they are shared grief with an entire nation."