Florence turns vicious as it heads for the U.S. East Coast 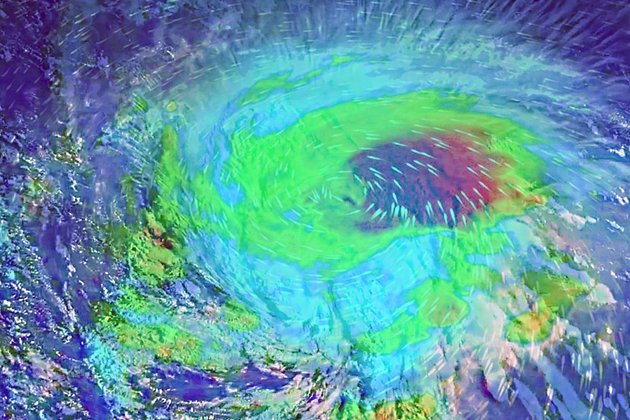 VIRGINIA, U.S. - As the monstrous Hurricane Florence approaches the U.S. East Coast, four states in the country have already declared a State of Emergency.

After becoming a hurricane over the Atlantic on Sunday, Florence grew into a Category 3 storm overnight.

Then, within an hour after growing in size and power and being upgraded to Category 3 status, Florence further intensified, and was reclassified as Category 4.

The monstrous storm is currently threatening sustained winds of about 130mph (215km/h) and is expected to make landfall near Wilmington in North Carolina on Thursday.

With the East Coast threatened, states of emergency have been declared in four states - the Carolinas, Virginia, Washington, DC, and Maryland.

According to forecasters, Hurricane Florence is set to become the most powerful storm to threaten the Carolinas in nearly three decades.

Further, they have warned that the storm is expected to further intensify, warning that there is a chance of "life-threatening inundation from rising water" over the next 48 hours.

The National Weather Service (NWS) has said in its latest update that Hurricane Florence - which is moving at about 17mph (28kmph) - is expected to "continue a slow strengthening trend for the next day or so."

While forecasters noted on Wednesday that the storm could weaken when it makes landfall on Thursday, they have still alerted everyone in the storm's path that Florence would most probably remain "an extremely dangerous major hurricane through landfall."

The NWS warned states on the East Coast that Florence could bring potential storm surges of up to 12ft (3.6m) on the coasts along with dangerously large swells and rip currents.

The Federal Emergency Management Agency (Fema) administrator, Brock Long, has warned that the almost 500-mile wide Hurricane Florence "could be the most dangerous storm in the history of the Carolinas."

Meanwhile, as authorities continue to constantly monitor the storm's path and movement, authorities are warning coastal residents of large storm surges and "rapid rise of water that is overwhelming and deadly."

Following warnings issued this week, officials have ordered mandatory evacuations of over 1.4 million coastal residents across the Carolinas and Virginia.

Addressing a news conference n Tuesday, North Carolina Governor Roy Cooper warned, "This storm is a monster. It's big and it's vicious. It is an extremely dangerous, life-threatening, historic hurricane."

South Carolina Governor Henry McMaster - who had initially ordered the entire coastline of his state to leave - said on Tuesday that the order was confined to the northern coast.

Amid the multiple warnings of disaster, residents of affected areas have been flocking to stores to stock up on essentials.

Earlier, U.S. President Donald Trump released federal money and resources for the storm response after signing declarations of emergency for both North Carolina and South Carolina.

On Tuesday, Trump issued a statement saying the government would spare "no expense" in responding to Hurricane Florence.

The U.S. President also praised his government's response to the aftermath of Hurricane Maria in Puerto Rico - calling it "one of the best jobs that has ever been done."

He even described it as an "incredible, unsung success."

Trump's statement, however, came in stark contrast to the assessment made by Carmen Yulin Cruz, the mayor of the Puerto Rican capital, San Juan.

Last month, authorities revised the official death toll from Hurricane Maria to nearly 50 times higher than the 64 deaths reported initially - revealing that an estimated 2,975 people had died in the disaster.

After the figures were unveiled in August this year, Cruz s described Trump's response to the disaster as a "stain on his presidency."