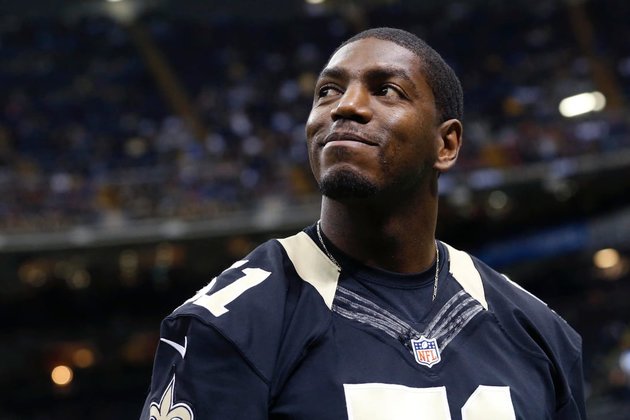 Vilma will be a game analyst for Fox this season

New Orleans Saints legend and Saints Hall of Fame member Jonathan Vilma is translating his knowledge of the game and passion for film study into an analyst role with Fox for the upcoming 2020 NFL season. Vilma is making the move from ESPN, where he served as a college football commentator since July 2016 and has appeared on ABC's pregame, halftime, and postgame coverage since 2018.

"I think Fox sold me on the idea of just being able to talk ball for three hours," Vilma said Tuesday in a video conference call with New Orleans media. "They know how I'm a student of the game. I like watching film. I enjoy breaking down the X's and O's of the game. So they said, 'If you really like that and that's what you enjoy, then why don't you come over here and do it for three hours a day as opposed to 10 minutes at a halftime of ESPN, or for maybe 20 or 30 minutes on one of the debate shows, Get Up or First Take.' So I thought about it, spoke with my family, and it felt like the right decision."

Vilma, who spent nearly a decade as a vocal leader on defense with the Saints and New York Jets, felt right at home stepping into the broadcast booth for the first time. The first game he called was a Thursday night college football matchup between Miami and North Carolina in 2018.

"It honestly was like I was sitting with my linebacker buddies and we were watching film on a Tuesday getting ready for Wednesday practice, or Wednesday getting ready for a Thursday practice," Vilma said. "That's what it felt like. You're up there, you see what's going on, and I would - when we were watching film, if it's with the linebackers I would say, 'Alright guys, we're looking at X, Y and Z. Hey, did you see that running back? Did you see his footwork? Did you see his steps? Did you see that O-lineman pull?' So, watching a game now is pretty easy now where I just felt like I was talking to my linebackers. So when I first called a game, it was like, 'Hey, this is what I see. Based on what I'm seeing, this is probably going to happen.' And you start looking at the matchups and the players. I always talk about respecting the phenoms. You can't disrespect the phenom players. You can't disrespect them and think that he's not going to make all the tackles during the game. When I'm calling a game, I look for the really good players. I like to focus on the good, and then talk about the scheme and go."

When Vilma was a standout for a successful University of Miami program in the early 2000s, he recalled meeting commentator Kirk Herbstreit and being impressed by the passion Herbstreit brought to the booth while calling games.

"It was always fun talking with him back then because you could tell he was passionate about college football," Vilma said. "He was passionate about the sport and a true fan of the game and the players. So I watched his career as he's evolved from not just (College) "Gameday," but to calling games for those Saturday night games. I was in studio for those Saturday night games, so I always made it a point to watch him. More about his delivery, more about his tempo. The way he's able to explain things very clearly, very smooth in his delivery and his approach. And then for the short time that he's on camera for halftime or pregame, I like to watch his body language as well. I've watched him a lot. I really like him in his job."

Vilma noted that as a commentator, it's the play-by-play announcer's show and that he is there to talk ball.

"I was told in between plays, that's my real estate. During plays, that's their (play-by-play) real estate. During home games, when the crowd is cheering, let that breathe a little bit. If it's a touchdown, let that breathe. I always said it's their show. I'm just there along for the ride. I talk ball. So if they have something to say, they want to keep going, be my guest. You know, we're here for three hours, so I don't have to always feel the need to speak and talk about every little thing that happens. Sometimes you just let it go."

Vilma has thought about the possibility of calling NFL games this season without fans in attendance due to the COVID-19 pandemic.

"Candidly speaking, all my thoughts have been selfish from the perspective of, well, if they're not here that means they're going to be watching me on TV. So I've kind of looked at it that way and I just left it at that. I'd rather have the crowd and the energy of the game, but it's not too bad, they're all going to watch me on TV now."

"Well, first, Demario's size. He's a big boy. He's about 6-foot-3, 240 pounds. His size and speed, especially in this era of football where it's smaller players and speed, he stands out with his size and his ability to cover ground," Vilma said. "Very smart player. I don't think he gets enough credit for being as smart as he is as a player. Frankly, I wish and hope that Dennis Allen and Sean (Payton) give him a little more rope to have reign over that defense. Because when I watch him, he knows what's happening. But his ability and his size, speed, and his smarts for the game, they really stand out."

Fox will broadcast 10 Saints regular season games in 2020. The Saints should expect to see Vilma back in the Mercedes-Benz Superdome this season covering the team he helped claim a Super Bowl title following the 2009 season.

WINCHESTER, Virginia - The FBI's robots have arrived in Virginia. And they're ready to be fed.Inside the Bureau's cavernous new ...

Trump and Republicans smart as Foxes, and cunning as Mice

Trump and Republicans are smart as Foxes and cunning as Mice. All hail the Mouse King.As the pace of the ...

ABU DHABI, UAE - A phone call by U.S. President Donald Trump clinched what is being described as an 'historic ...

The catastrophic blast which led to the deaths of more than 200 in Beirut on 4 August, has prompted more ...

PERTH, Western Australia - A 28-year-old man was scheduled to appear in Perth Magistrate's Court on Friday over allegations he ...

NEW YORK CITY, New York - A man who was arrested as he was about to board a plane at ...

Mixed day on Wall Street, Dow the only gainer

NEW YORK, New York - U.S. stocks meandered in and out of positive territory on Friday and ended up with ...

Companies from China seek to list in U.S. despite trade tensions

SYDNEY, Australia - Stocks in Asia were on the rise on Friday, while the U.S. dollar was mixed. Only the ...

Fears mount over last weeks of Trump presidency if he loses

What could happen to America if Trump were to further, severely crash the U.S. economy the day after Joe Biden ...