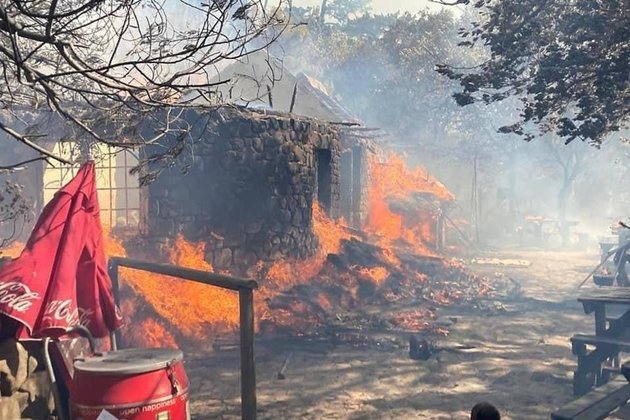 The University of Cape Town (UCT) has begun evacuating students from the campus as a runaway veldfire close to Rhodes Memorial wreaked havoc on Sunday.

"All UCT students have been evacuated from campus by emergency services support staff. We have taken them to predetermined locations," UCT's spokesperson, Elijah Moholola, said.

He added the university would continue to work with and support SanParks and the City of Cape Town to extinguish the blaze.

The City's Fire and Rescue Services was closely monitoring the fire on Sunday.

The blaze was located close to the M3 highway on the slopes of Table Mountain.

The City said there was no cause for people to be evacuated.

Disaster Risk Management spokesperson Charlotte Powell said at this stage, they have asked residents to be cautious.

"Close all windows and doors to prevent drafts and reduce heat. Should there be an immediate threat to your property, damp down your garden using a hose or irrigation system."

She added Disaster Risk Management was monitoring the situation closely.

"Wildfire creates smoky conditions, so it's important for everyone to reduce exposure to smoke. Wildfire smoke irritates your eyes, nose, throat and lungs. Children, pregnant women, people living with asthma and heart disease need to be especially careful," Powell said.

The veldfire has destroyed parts of the Rhodes Memorial Restaurant and Tea Garden located on the slopes of the mountain.

Meanwhile, the Table Mountain National Park urged all hikers within the Newlands and Rhodes Memorial area to evacuate with immediate effect.

Local Government, Environmental Affairs and Development Planning MEC Anton Bredell said the situation was serious with the fire spreading towards sections of UCT.

"The public is urged to avoid the area and allow the authorities to do their work. The wind is slowly picking up, which is a cause for concern. The City of Cape Town firefighting service as well as teams from SanParks and Working on Fire are on the scene already."

Bredell added the authorities on the ground would inform members of the public immediately should the situation become more serious.

ROME, Italy: Two young Americans have been sentenced to life in prison for the 2019 slaying of an Italian policeman.Found ...

JERUSALEM - Celebrating the final week of Ramadan, thousands of Palestinian worshippers at the Al-Aqsa Mosque gathered for prayer time ...

WASHINGTON DC - Amidst the radical turndown in the American economy during the Covid lockdown, birth rates in the United ...

WASHINGTON D.C.: The White House is talking with lawmakers to offer subsidies to the nation's nuclear power plants, in a ...

Google changing rules on working in office after Covid

MOUNTAIN VIEW, California: Some 20 percent of Google's staff will continue to work remotely after the offices reopen in the ...

Losses climb for Hyatt amid pandemic as public remains homebound

CHICAGO, ILLINOIS: Hyatt Hotels has reported that it is facing greater losses in Q1 as the public opted to remain ...

WASHINGTON D.C.: As part of a larger drive by lawmakers to advance climate and energy legislation, members of a U.S. ...

BEIJING, China: China set a new tourism record, as the Chinese made some 230 million trips over the extended May ...

NEW YORK, New York - It was like Groundhog Day as stocks forged to new highs on Wall Street on ...