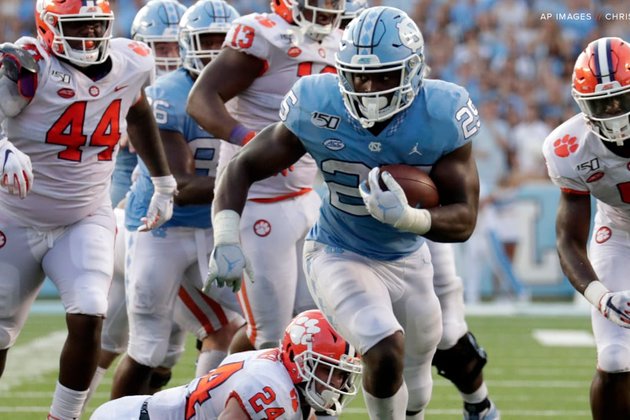 ENGLEWOOD, Colo. - Javonte Williams didn't get a ton of opportunities during his final season at North Carolina.

But, man, did he take advantage of the ones he received.

Williams carried the ball 157 times last season, while his North Carolina teammate Michael Carter toted it on 156 occasions. Despite the limited workload, Williams ran for 1,140 yards and an ACC-leading 19 touchdowns. His 7.3 yard-per-carry average in his final season ranked third in the conference.

Williams' success in Carolina shows the potential he could display in Denver, even though he'll likely again share carries. A year ago, Melvin Gordon III carried the ball 215 times for 986 yards and nine touchdowns, while Phillip Lindsay ran 118 times for 502 yards and one score. If Williams could maintain his career rushing average (6.2 yards per carry) from Carolina, then 118 attempts would put him north of 700 yards on the season. The Broncos would likely be quite pleased with that output from Williams in what figures to be a three-man rotation.

"Hopefully this year with our three backs - [Mike] Boone being one of them, who we really like that we signed in free agency - we'll get a nice flow and get a good understanding and philosophy of the system which we'll take from week to week to utilize all three of them," Head Coach Vic Fangio said during the draft of the team's future rotation.

When he does get the ball, Williams should be able to display an impressive skill set.

Whether he's between the tackles or in the open field, Williams is hard to bring down. In 2020, Williams broke a Pro Football Focus record for broken tackles per rushing attempt (.48) and his 75 broken tackles on the season were the most in college football.

Williams posted the fourth-most yards after contact (831) last season, which likely helped him tally 27 carries of at least 15 yards. Only one running back in the nation had more carries of 15 or more yards than Williams.

"If I see someone in front of me, I want to go through them or make them miss in some sort of way," Williams said after being drafted.

Pro Football Focus compared Williams to a bigger Aaron Jones, who has run for 25 touchdowns and nearly 2,200 yards over the last two seasons. Jones earned his first Pro Bowl nod in 2020 as he averaged 5.5 yards per carry.

His tackle-breaking ability also showed up in the passing game, as he broke nine tackles on his 24 receptions last season.

There's still room for improvement in Williams' game, which is encouraging given his success in college. He was credited with three drops on 27 catchable targets, and while his burst off the line of scrimmage is elite, he may not run away from defenders down the field.

Williams' strengths, though, far outweigh the areas where he needs to improve. In addition to his violent running style, he's also shown an ability to make an impact in the passing game - both as a receiver and a blocker.

And after being selected behind Najee Harris and Travis Etienne, Williams also has the motivation that could fuel him in Denver.

"I definitely feel like I am the best running back in the draft," Williams said. "Having to sit through the entire first round yesterday was hard for me. I've always been overlooked throughout my career. It's something else for me to go even harder for."

The Broncos clearly saw potential in the 5-foot-10, 212-pound player, and they traded up from No. 40 to No. 35 to ensure they wouldn't miss out on the talented, all-around player.

"We just think he is a special back," Paton said after drafting Williams. "A three-down back, really good on first and second down. He can pass protect, and he can catch the ball in the backfield. Just an incredible teammate, incredible off of the field. He is a gift-player - we call guys gift players who are exceptional off the field as well as on. He fit our criteria."