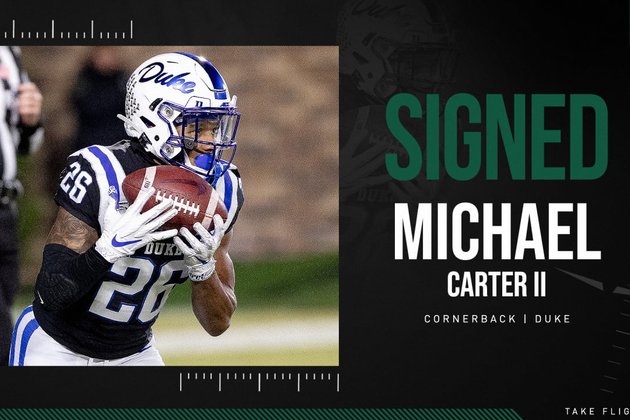 Cornerback Michael Carter II, the first of three CBs taken by the Jets on Day 3 of the 2021 NFL Draft, has signed with the Green & White.

Carter II has had a memorable spring, getting drafted by the Jets, receiving his degree from Duke University and then penning his name on his first professional contract.

In 46 games with the Blue Devils, Carter II started 36 contests and had 24 PBUs as that total tied him for 10th all-time in program history. Last season, Carter started all 11 games and had 41 tackles, 3 TFL and 2 INTs. He finished tied for ninth in the ACC in pass defenses with 10.

"When the ball is in the air, I think it's mine," Carter II said. "I believe I have more of a right to that ball than the receiver does, so I'm going to get it."

At Duke's Pro Day, Carter blazed to a 4.30 time in the 40-yard dash and had a vertical jump of 35.5. He played nickel, cornerback and safety in college.

During the Jets' draft-day call to Carter II, Jets head coach Robert Saleh said: "We (have) a plan for you in this defense. Your combination of speed, athleticism, your man coverage ability, your instincts, your smarts, all of it. All of it works in what we do."

Carter II joins former Duke lettermen Jamison Crowder and Thomas Hennessy on the Jets. A team captain last season, Carter II was a three-time Academic All-ACC selection. A semifinalist for the prestigious William V. Campbell Trophy, an honor presented by the National Football Foundation & College Hall of Fame that recognizes the top football scholar-athlete in the nation for his combined academic success, Carter II also contributed on special teams at Duke and has kick return experience.

"Special teams was something I was always on, all four years of college at Duke," he said. "I played every special teams at some point in my career and was willing to do that and even asking to be on special teams and be a gunner and return kicks and things like that."

Carter II was selected 47 picks after the Jets drafted Michael Carter, the former North Carolina running back, with the second pick of Round 4.