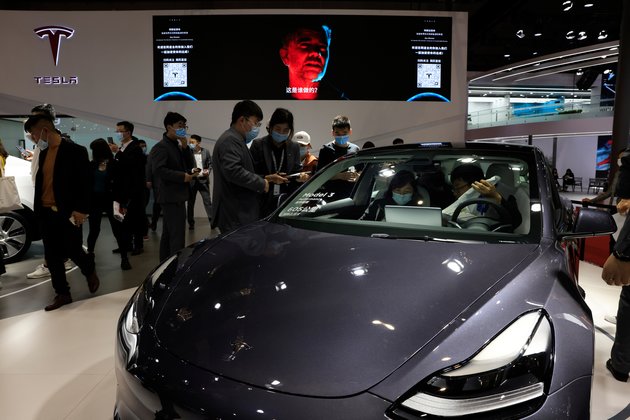 In 2018, Elon Musk signed an agreement with the Shanghai Municipal Government to open a plant to make Tesla vehicles, making it the first non-Chinese auto company with a solely owned subsidiary in China since the 1990s.

Now the company is facing a backlash over its electric car business there.

And, experts say, by making use of anti-American public sentiment, the ruling Chinese Communist Party (CCP) is making a move against Tesla that is well-known to foreign companies with technologies it covets: To stay in China's lucrative market, a company must share its tech with Beijing.

"There is little doubt in my mind that the CCP is squeezing the American company through a controlled burst of anti-American xenophobia because of Tesla's phenomenal success in China, its advanced technology, and its close involvement in U.S. space programs," said Miles Yu, a senior fellow at the Hudson Institute who specializes in U.S. and Chinese military and diplomatic history, and U.S. policy toward China.

On May 2, Musk's SpaceX ended its first commercial crew, long-duration endeavor with NASA, returning four astronauts to Earth after six months aboard the International Space Station.

According to Tesla's U.S. Security and Exchange Commission (SEC) filing for 2020, the local government granted the Tesla Gigafactory Shanghai incentives to be used in connection with eligible capital investments, and a corporate income tax rate of 15% for 2019 through 2023.

This is lower than China's 25% statutory corporate income tax rate, according to the accounting firm, PwC China. China also exempted Tesla's electric vehicles from its purchase tax, the Ministry of Industry and Information Technology (MIIT) said on August 30, 2019. The exemption from the 10% purchase tax could reduce the cost of buying a Tesla by up to 99,000 yuan ($13,957.82), according to a post on Tesla's social media WeChat account, and retweeted on China's Twitter-like platform, Weibo.

The company announced it would begin selling the Chinese-made Model 3 on January 25, 2020, which was Lunar New Year. Tesla beat that goal, delivering its first cars at the end of December, less than a year after breaking ground in Shanghai.

FILE - A customer looks at automobiles in a Tesla car showroom in Beijing, June 11, 2020.

Tesla sold more than 137,000 Model 3s in 2020, making it the best-selling electric car in China, according to the China Passenger Vehicle Association.

According to the SEC filing, Tesla's 2020 revenue from China increased 124% year-over-year on sales of $6.6 billion.

Then China pulled a U-turn.

Earlier this year, China's military banned Teslas from military barracks and family quarters, citing security concerns over the onboard cameras, according to the Wall Street Journal, which first reported the ban on March 19.

There are eight cameras in a Model 3 -- three in front, two on each side and one at the rear -- which are used for the autopilot, the security system and the dashcam, according to Car and Driver. The cameras can obtain data, including when, how and where the vehicles are being used as well as the contact lists of mobile phones synced to them. Beijing was concerned that some data could be sent back to the U.S., according to the Journal.

On March 20, Musk assured members of the government-backed China Development Forum in Beijing that the cars were not spying and that the data collected from cars in China was kept in China.

VOA contacted Tesla in the U.S. and in China, where VOA contacted Tesla media offices and the sales center in Shanghai to request an interview on possible pressure from Chinese authorities and concerns about technology transfers. The company did not respond.

Then, on April 19, at the Auto Shanghai 2021 trade show, a Tesla owner climbed onto the roof of a Model 3 and shouted "Tesla brakes fail," giving voice to a problem that customers claimed they had found in some of its China-made cars.

Video of the woman, identified only as Zhang, went viral.

Tesla responded within hours on Weibo, a Twitter-like Chinese platform, saying, "We won't respond to unreasonable requests from customers."

The remark drew enough online criticism that China's state media, controlled by the CCP, jumped in and accused Tesla of being "arrogant."

Later on April 19, Tesla posted, "We apologize and self-reflect (on our behavior)."

But netizens were shifting their criticism of Tesla into overdrive as Zhang's remarks had hit home with many Chinese Tesla owners, and within days her post had more than 220 million views on Weibo. By comparison, Tesla sold just under 635,000 vehicles in China in 2019 and 2020, according to Nikkei Asia, which used China Passenger Car Association figures.

On April 22, Hu Xijin, editor-in-chief of the Global Times, an official Chinese state outlet, posted on his Weibo account, "I believe that Tesla feels the hardness of China's market rules, as well as its strength and dignity, and they will understand that only practical adjustments can restore public trust."

Tu Le, an analyst at Sino Auto Insights, a research organization, told Reuters, "Social media has always been dissatisfied with the quality and service issues of Tesla in China. Until Tuesday, these issues were basically ignored by the local Tesla team."

Zack Cooper, senior fellow at the American Enterprise Institute, believes the change of Tesla's attitude is common for private companies operating in China. If a company wants to succeed in China, they must make statements in line with the CCP that can be "problematic," he said.

Facing the online outcry from the Chinese public and the ensuing coverage from official state media put Tesla bumper-to-bumper with the CCP.

According to Cooper, who spoke with VOA by phone, it's a concern "from the American side -- does Elon Musk have to say certain things about China or about the Communist Party so that he can continue to operate (a) business in China?"

Cooper continued, "If you are operating in China, then the Communist Party has some ability to regulate your business operations. Obviously, some of that is legal and not problematic. Other parts that involved political influence that I think are problematic. ... So I think there are broader ... questions about the kinds of activities businesses are required to engage in, and the kinds of political statements they have to make or support, if they are going to operate in the Chinese market in a significant way."

Yu, of the Hudson Institute, told VOA Mandarin that what has happened to Tesla is a common "bait and switch" strategy China uses on foreign investments with critical technologies and proprietary innovations.

Yu said China lures a foreign enterprise "into China with initial preferential tax and regulatory treatments. Once you are hooked in China, and have gained initial success, the CCP would not hesitate to use your investments in China as a leverage to force you to comply with a whole list of demands, outright or subtle, including sharing proprietary technologies and knowledge, prohibiting transfer of funds out of China, curtailing your market share inside China and possibly divulging critical national security secrets in your company's other operations with the U.S. government such as the SpaceX project."