Canes focus on discipline after losing 2-0 series lead vs. Bruins 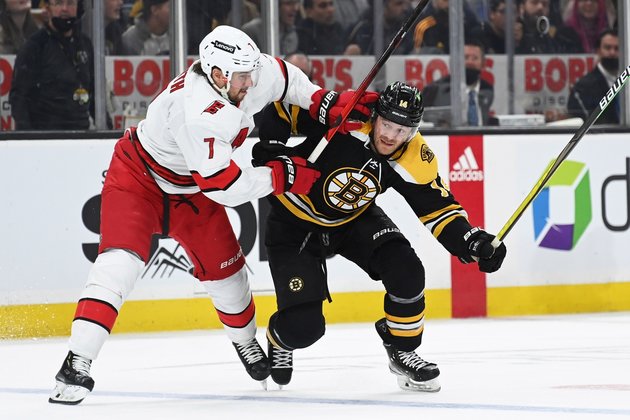 Their series lead now erased, the Carolina Hurricanes know what they must do to get back on track when they host the Boston Bruins in Game 5 of their first-round playoff series Tuesday night.

It begins with staying out of the penalty box.

"We took too many," Carolina coach Rod Brind'Amour said. "I don't know what they ended up with, how many, it just felt like the whole game we were short-handed. Their top guys are elite as they come. You just can't give them those looks."

The Hurricanes took eight penalties in a 5-2 loss in Game 4 on Sunday. Six were in the second period, one of which was a double minor that carried over into the third. The Bruins converted twice to tie the game 2-2 and notch the game-winner 44 seconds into the final frame to even up the series.

"Those guys are really good hockey players and they've been doing it for a long time, veteran guys who have won the Stanley Cup," Carolina forward Vincent Trocheck said. "They know what it takes. We have to make sure we're limiting them, but they're going to get their chances and score their goals. We just have to be a little more disciplined."

As the series shifts back to Raleigh, N.C., the Hurricanes hope to get back to the formula that saw them stake out a 2-0 series lead.

"It starts over now," Brind'Amour said. "We'll just regroup. You should have emotion right now, it should hurt, and it should bother you. Then you start fresh, and you're excited we've got another game to play."

The Bruins returned to an old formula to find success in their past two games. Coach Bruce Cassidy reunited "The Perfection Line" -- with Patrice Bergeron centering Brad Marchand and David Pastrnak -- midway through Game 2. The trio combined for 10 points in Game 4, with Marchand accounting for half of that (two goals, three assists).

"(He) takes it on himself to help the team in any way he can," Bergeron said of Marchand. "He always rises up to the occasion every time there's a big moment. There's no surprises there."

While the Bruins are feeling good about themselves heading into Game 5, they know they can't rest on their laurels.

"There's a lot of pride in the room, a lot of character," Marchand said. "We've always shown that and luckily we were able to pull out a couple of wins. Regardless of how the next game plays out, we have to make sure we're prepared. They're going to come out hard."

Boston will once again be without defenseman Charlie McAvoy, who entered COVID protocol on Sunday and was not expected to make the trip.

There was some good news on the back end, however, as Hampus Lindholm participated in an optional skate on Monday. Lindholm has missed the past two games after being injured in Game 2.

"I'm not going to rule him out, but I'm not putting him in either right now," Cassidy said. "I have to hear from the doctors that he's cleared. I don't need to see anything. If he's cleared, he's in."

MOSCOW, Russia: According to preliminary data released by the finance ministry this week, almost three months after Moscow's invasion of ...

KUALA LUMPUR, Malaysia: After China's decision to not host the 2023 Asian Cup, a choice for a new host will ...

Strong support for Taiwan to attend WHO meeting this week

GENEVA, Switzerland: The World Health Organization (WHO) has received a proposal by 13 member states requesting that Taiwan be allowed ...

BRUSSELS, Belgium: European Union foreign policy chief Josep Borrell has said that the bloc would ensure Ukraine that it has ...

Former U.S. President George W. Bush has made an embarrassing mistake in criticizing Russian President Vladimir Putin over his decision ...

WASHINGTON D.C.: The U.S. State Department has announced the launch of a new program to capture and analyze evidence of ...

Target reports profits down 52%, shares down 25%

MINNEAPOLIS, Minnesota: Amidst the rising costs of essentials, such as fuel and food, and the rapid return by consumers to ...

WASHINGTON D.C.: After its U.S. asset management unit pleaded guilty to criminal securities fraud after the collapse of a group ...

SACRAMENTO, California: In another blow to the state's push to diversify corporate leadership, a California court judge has ruled that ...

KATHMANDU, Nepal - According to the World Organization for Animal Health (OIE), Nepal has reported its first cases of African ...