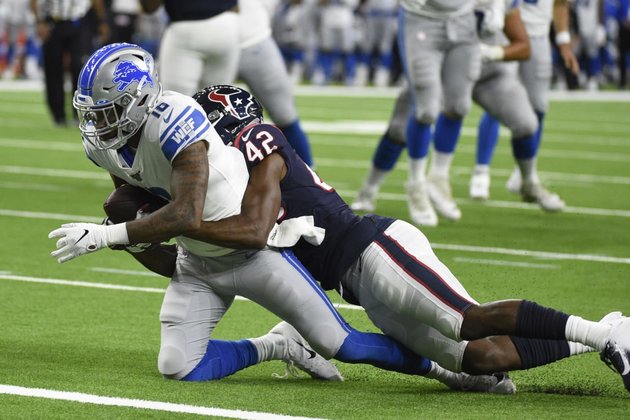 The 2022 Schedule Has Been Released & Tickets Are On Sale

The 2022 Schedule is here and Single Game Tickets are now on sale. Secure yours today to experience the best gameday in the NFL!

Learn More & View Tickets The Seahawks made a handful of roster moves Friday, adding a pair of receivers and waiving four players.John Boyle

The Seahawks added a pair of receivers on Friday, signing Deontez Alexander, who came into the league as an undrafted rookie in 2018, and Kevin Kassis who went undrafted out of Montana State in 2020.

Alexander, who played at Division III Franklin College, first signed with the Lions as a rookie in 2018 and was in Detroit for multiple stints on the roster and practice squad over the next two seasons. At Franklin, the 6-foot-1, 196-pound Alexander averaged 101.6 yards per game over two seasons, catching 114 passes for 2,133 yards and 33 touchdowns.

Kassis finished his Bobcats career with 1,966 receiving yards and 152 receptions, both of which rank fourth all-time at Montana State.

MOSCOW, Russia: According to preliminary data released by the finance ministry this week, almost three months after Moscow's invasion of ...

KUALA LUMPUR, Malaysia: After China's decision to not host the 2023 Asian Cup, a choice for a new host will ...

Strong support for Taiwan to attend WHO meeting this week

GENEVA, Switzerland: The World Health Organization (WHO) has received a proposal by 13 member states requesting that Taiwan be allowed ...

BRUSSELS, Belgium: European Union foreign policy chief Josep Borrell has said that the bloc would ensure Ukraine that it has ...

Former U.S. President George W. Bush has made an embarrassing mistake in criticizing Russian President Vladimir Putin over his decision ...

WASHINGTON D.C.: The U.S. State Department has announced the launch of a new program to capture and analyze evidence of ...

Target reports profits down 52%, shares down 25%

MINNEAPOLIS, Minnesota: Amidst the rising costs of essentials, such as fuel and food, and the rapid return by consumers to ...

WASHINGTON D.C.: After its U.S. asset management unit pleaded guilty to criminal securities fraud after the collapse of a group ...

SACRAMENTO, California: In another blow to the state's push to diversify corporate leadership, a California court judge has ruled that ...

KATHMANDU, Nepal - According to the World Organization for Animal Health (OIE), Nepal has reported its first cases of African ...