DJ Uiagalelei leads No. 5 Clemson past No. 10 NC State 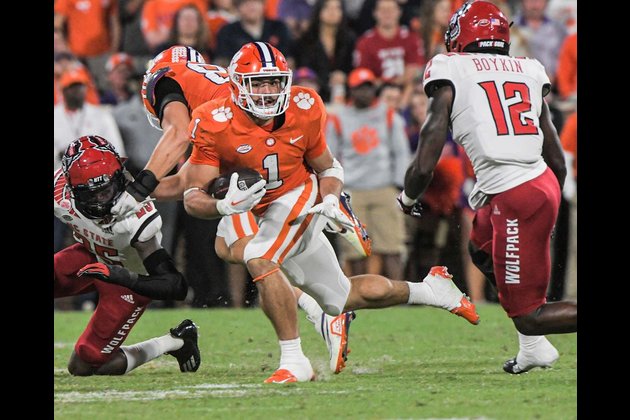 DJ Uiagalelei ran for two touchdowns and threw for another and No. 5 Clemson used several long possessions to help secure a 30-20 home victory against No. 10 North Carolina State on Saturday night in Clemson, S.C.

Uiagalelei was the game's top producer on the ground with 73 yards on 14 carries and he also threw for 209 yards by completing 21 of 30 passes to help Clemson avenge an overtime loss from last season.

NC State (4-1, 0-1) scored only three points in the second half until the final minute and remained winless in Death Valley since 2002.

Quarterback Devin Leary went 28-for-47 for 245 yards, but the Wolfpack were limited to 34 rushing yards. He ran for a 4-yard touchdown with 53 seconds left.

Clemson went 58 yards in four plays for a touchdown on its first possession of the second half, with Uiagalelei connecting on a 7-yard toss to Jake Briningstool.

NC State had a response with Christopher Dunn's 49-yard field goal to close the gap to 20-13.

After that, Clemson was just too tough on defense.

B.T Potter made three field goals, including a 44-yarder in the opening minute of the fourth quarter to extend the Tigers' lead to 23-13.

The Wolfpack led for the first time with 1:51 left in the first half on Leary's 2-yard pass to Ced Seabrough to complete a nine-play, 75-yard drive.

The Tigers regained the lead 31 seconds before halftime on Uiagalelei's 1-yard run, going up 13-10.

Clemson had 13- and 14-play drives in the first half, though those produced only field goals.

Clemson marched 72 yards on the game's first possession to reach the NC State 3, but settled for Potter's 20-yard field goal. His 46-yarder put the Tigers back on top in the second quarter after Dunn's 20-yarder for the Wolfpack tied the game at 3-3 at the end of the first stanza.