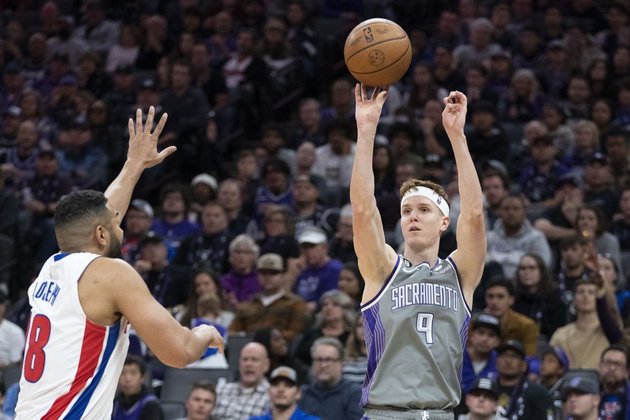 The last team to see the "old" Sacramento Kings will become the 12th to experience the new-and-improved edition when the Western Conference's hottest team visits the Memphis Grizzlies on Tuesday night.

The last time the clubs met, the Grizzlies handed the Kings their fourth consecutive loss to open the season as the Grizzlies got 31 points from Desmond Bane in a 125-110 victory in Sacramento.

Much has changed in the nearly four weeks since. While the Kings have won nine of 11, including six in a row, the Grizzlies are just 6-6 while losing Bane to a sprained right big toe and Ja Morant to a sprained left ankle.

Sacramento's winning ways figure to get tested on a four-day trip to Memphis, Atlanta and Boston that will sandwich Thanksgiving.

The winning streak has featured double-figures scoring from seven different players, including De'Aaron Fox, who has used 57.7 percent shooting to fashion a 24-point scoring average during the run.

Fox hit 11 of 18 shots from the field and totaled 33 points in Sunday's 137-129 home win over the Detroit Pistons, a game in which the Kings topped 130 points for the third straight time and 120 for the sixth consecutive game.

"This is the best basketball (he's) played in his career," teammate Harrison Barnes said of Fox. "He's playing at an All-Star level. He's doing it on the offensive end (and the) defensive end. Getting guys involved. Just all over the place making plays happen."

Fox had 27 points and Barnes 20 in the earlier loss to Memphis, while Domantas Sabonis missed a triple-double by one assist.

While their outstanding play has continued, a key to the Kings' improvement has come via the 3-point shooting of Kevin Huerter and Terence Davis, who have combined to go 32-for-64 during the winning streak.

Over the six games, Sacramento has shot 40.8 percent from 3-point range, the fourth-best mark in the league over that stretch.

Meanwhile, the Grizzlies have lost their way defensively. After holding Charlotte and Washington to 99 and 97 points in the final two outings of a three-game winning streak at the beginning of the month, Memphis has watched each of its past seven opponents go for 102 or more.

Two of those foes topped 120, including the Brooklyn Nets in a 127-115 home win over Memphis on Sunday. Dillon Brooks paced the short-handed Grizzlies with 31 points.

Jaren Jackson Jr. joined Bane and Morant on the sidelines Sunday because he's being brought along slowly following off-season surgery on his right foot. He's expected back to face the Kings.

"You take it in stride," Grizzlies coach Taylor Jenkins said of the inconsistent lineups. "You control what you can control. We just got to rely on our depth."

Memphis is 0-2 this season in games in which neither Bane nor Morant has played. Tyus Jones has started both of those games and has averaged 15 points and 5.5 assists.

BUENOS AIRES, Argentina: A massive wave struck the Viking Polaris cruise ship this week as it was sailing toward the ...

After years of upheaval, US judge throws out Huawei fraud indictments

NEW YORK City, New York: Last week, a U.S. judge has dismissed an indictment against the chief financial officer of ...

PALMDALE, California: Northrop Grumman has unveiled its new B-21 "Raider" jet, the first in a new fleet of long-range stealth ...

Change comes to US auto union as reformers win elections

NEW YORK, New York - Stocks in the U.S. and around the world fell on Wednesday although losses were mostly ...

Hearing aids now sold without prescriptions in US

WASHINGTON D.C.: Hearing aids can now be sold without prescriptions from a doctor in the U.S., making it easier and ...

Musk confirms that apple to resume advertising on Twitter

SEATTLE, Washington: Amazon.com is planning to resume advertising on Twitter, pending some security tweaks to the company's ads platform, purchasing ...

Mexico, US plan joint strategy to lure businesses back to N. America