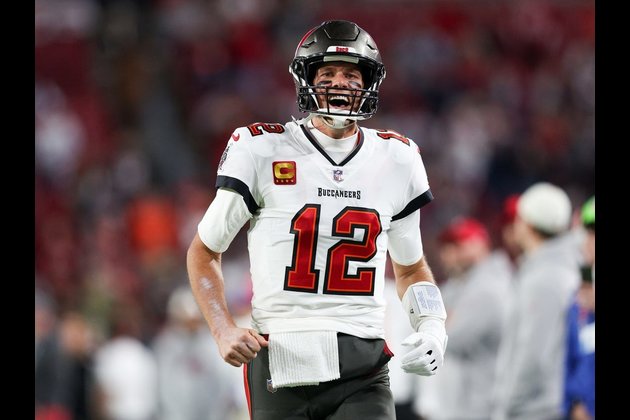 Retirement isn't the only dirty word Tom Brady is kicking around while contemplating his plans for 2023.

On his "Let's Go" podcast with Sirius/XM Radio, Brady went with blue material in response to Jim Gray's question about his timeline for a decision about whether to play next season.

"Jim,if I knew what I was going to (expletive) do, I would've already (expletive) done it. I'm taking it a day at a time," Brady said.

Brady is an unrestricted free agent and big changes are afoot with the Tampa Bay Buccaneers, who fired offensive coordinator Byron Leftwich one year after making a head-coaching change. Brady turns 46 in August but set a record for passing attempts and total seasons with 25-plus touchdown passes in 2022 at age 45.

He retired briefly last February, only to return to the team while going through a divorce from world-famous model wife Gisele Bundchen.

Gray also asked Brady about receiving a fine letter from the NFL last week for a failed attempt to trip Cowboys safety Malik Hooker following an interception in the wild-card loss to Dallas.

"I tried to trip him, but I didn't. I don't know how you can get fined for something that didn't even happen. Are they fining an intention? It's like targeting, and you miss the person you hit, and they still call it targeting. I've gotta figure out and understand why this is the case. It's a little odd. This is why I wish our NFLPA was stronger."

Several teams are in the market for a quarterback.

The New York Jets are operating on orders from owner Woody Johnson to find the "missing piece," which he defined as a veteran quarterback. Brady just completed his 23rd NFL season, 20 of them with the Jets' AFC East rival New England Patriots.

The Carolina Panthers and Indianapolis Colts, recent constants on the offseason QB carousel, are back for another spin this spring, as are the Houston Texans.

Those three teams own draft picks in the top 10 of the 2023 NFL Draft and might opt for a younger, cheaper model of quarterback. Alabama's Bryce Young, Field Level Media's top-rated quarterback in the upcoming draft, was born 15 months after the Patriots drafted Brady 199th in 2000.

Public health experts have welcomed Mexico's ban on cigarette smoking in all public places, including hotels and beaches, after the ...

France military ordered out of Burkina Faso in west Africa

OUAGADOUGOU, Burkina Faso: As Burkina Faso, in western Africa, faces an Islamist insurgency, it is set to end a military ...

As births continue to fall, Japan seeks incentives for parents

TOKYO, Japan: Japanese Prime minister Fumio Kishida said this week that it was "now or never" for Japan, one of ...

US moving towards offering annual Covid vaccines to most Americans

WASHINGTON D.C.: As part of its efforts to simplify the national COVID-19 vaccine strategy, the US Food and Drug Administration ...

WASHINGTON D.C.: US authorities said this week that a surge in Cubans and Nicaraguans arriving at the US border with ...

Artificial meat given first approval by US officials

NEW YORK CITY, New York: As early as this year, lab-grown meat could be served in some restaurants in the ...

As travel opens up, Thailand prepares for 5 million Chinese tourists

BANGKOK, Thailand: Following China's reopening and the end of its strict COVID-19 restrictions, businesses on Thailand's holiday island of Phuket ...