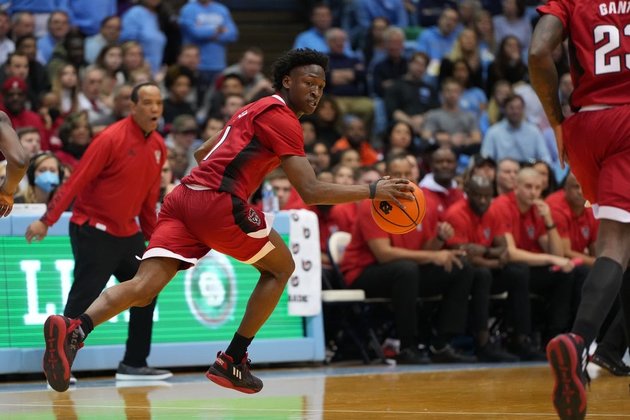 Jarkel Joiner scored 28 points as North Carolina State got back in the win column, beating Notre Dame 85-82 on Tuesday night in Raleigh, N.C.

Joiner shot 9-of-18 from the floor and a perfect 8-of-8 from the charity stripe, adding six rebounds for the Wolfpack (16-5, 6-4 ACC), who have now won eight of their last 10 games. It's the fifth time this season Joiner has scored at least 25 points in a game, and the Wolfpack are 4-1 in those contests.

NC State also got 17 points, six assists, three rebounds and three steals from Terquavion Smith, who was a game-time decision following the hard fall he took in the Wolfpack's loss at North Carolina on Saturday. Smith played 39 minutes and shot just 2-of-14 from the floor, but made 11 of his 13 free throws.

The Wolfpack were also boosted by 14 points from D.J. Burns Jr. and 11 from Casey Morsell.

The Irish led by as many as seven points in the first half. Trailing 31-29 with 4:56 to play in the opening half, Notre Dame broke off an 11-2 run to take the lead. Ven-Allen Lubin scored four points during that stretch and finished the game with 10 points. At the half, Notre Dame held a narrow three-point lead.

NC State took the lead back in the second half with an 11-0 run over a stretch of 2:24. Joiner had four points in that span and the Wolfpack shot 4-of-4 from the floor while Notre Dame missed all three of its shot attempts.

Notre Dame clawed back and got within one point of the lead on Ryan's 3-pointer with five minutes to play, but NC State kept the Irish at arm's length.

Key for the Wolfpack was their ability to score points off Notre Dame turnovers while also stopping the Irish from doing the same. NC State flipped 15 Irish turnovers into 18 points, while holding Notre Dame to zero points on just two turnovers of its own. Two turnovers is the fewest NC State has had in a single game since Kevin Keatts became head coach ahead of the 2017-18 season.

DALLAS, Texas: Oil and gas pipeline operators are preparing to stockpile equipment following severe weather forecasts for the next few ...

TikTok CEO to appear before US Congress to discuss security concerns

WASHINGTON D.C.: As US lawmakers investigate the Chinese-owned video-sharing app TikTok, its Chief Executive, Shou Zi Chew, has confirmed that ...

TEHRAN, Iran: A gunman this week stormed the Azerbaijan Embassy in the Iranian capital, Tehran, and killed its security chief ...

To boost tourist spending, Philippines to refund VAT starting in 2024

MANILA, Philippines: In an effort to attract more tourists, President Ferdinand Marcos has approved a value-added tax refund program for ...

Concerns about recession in Germany after economy shrinks in Q4

FRANKFURT, Germany: Data released this week showed that the German economy unexpectedly shrank in the fourth quarter of 2022, indicating ...

TOKYO, Japan: In a statement posted on the website of the Chinese Embassy in Tokyo, Beijing announced that it will ...

WASHINGTON D.C.: In the latest indication that its interest rate hikes are slowing the US economy, the Federal Reserve's main ...