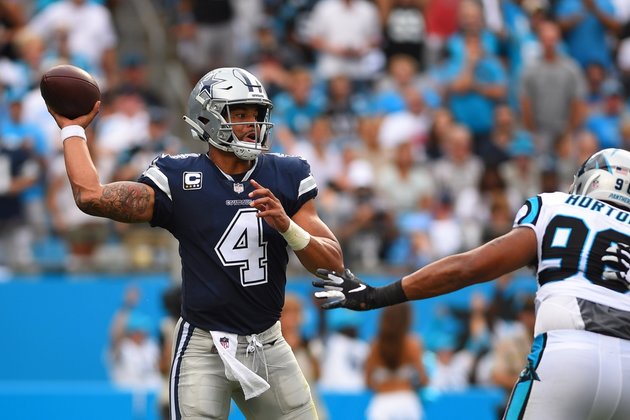 Should the New York Giants lose Sunday night to the Dallas Cowboys at ATT Stadium, the Giants' regular-season record would fall to 0-2 -- the fourth time in the last five seasons they failed to record a win in their first two regular-season games.

Why is that significant? Because over that same period, the Giants have only made one playoff appearance -- that being in 2016 when they began the year 2-0. They finished below .500 in the other four seasons, leaving their fan base an unhappy group.

An 0-2 start doesn't necessarily spell the end of the world for a football team. The 2007 Giants team that went on to win the Super Bowl lost its first two games, as did the 2001 Patriots and the 1993 Cowboys.

"We don't worry about that," Giants coach Pat Shurmur said of starting a season 0-2. "That's fun for everybody to talk about outside the building. We didn't do enough in the first game to win the game, and we're working to do what we can to win this next one. Period. End of story."

This "next one" is certainly more important to the Giants because if they are to have any chance of qualifying for the postseason, they need to take care of business in their division, something Shurmur realizes.

The Cowboys swept the season series last year, outscoring the Giants 49-13, but nine of the 10 games before that had been decided by a touchdown or fewer. Dallas has won two out of the last three games played at ATT Stadium.

"Any division game means a great deal," Shurmur said. "I do think (the games) all count, so it's important that we put all our focus on Dallas and worry about beating Dallas on Sunday night, this Sunday night, before we move on to anything else."

Dallas (0-1) had its own problems in the opener. The Cowboys gave up six sacks, committed four penalties for 35 yards and suffered costly miscues in the passing game. As a result, the Carolina Panthers shut out Dallas for the first three quarters and Carolina took a 16-0 lead in the process.

"The biggest thing we had in the game the other day was we were out of rhythm too much with the minus plays early," coach Jason Garrett said. "If we're just more efficient offensively and minimize those minus plays, stay ahead of the chains, I think we'll be able to see more of our offense."

The sloppy offensive game followed a preseason in which Dallas sidelined quarterback Dak Prescott and many of the offensive first-teamers for the final two preseason games.

The Cowboys made the decision that, with a couple of key offensive line starters battling injuries, they weren't going to risk their front-line skill players.

Did that cause a lack of continuity for Dallas in its regular-season opener? Garrett hasn't conceded that.

Is the Cowboys' Sunday night clash with the rival Giants now a must win? Garrett declined to put that kind of emphasis on it.

The Cowboys coach instead said the team is focusing on itself and getting better.

A week after trying to slow down Carolina dual-threat quarterback Cam Newton, the Cowboys face a totally different style in the Eli Manning-led Giants.

"Obviously, (Manning is) an elite quarterback and been a great player in this league for a long time," Garrett said. "He has a lot of weapons. The receivers outside are big-time players, really good route runners and great with the ball after they catch it. The tight end is an outstanding receiver, we've talked about the running backs, so there's a lot of weapons around him and they continue to get better and better and better. They challenge you a lot of different ways."

Giants rookie running back Saquon Barkley rushed for 106 yards and a touchdown in his NFL debut.

The Cowboys would like to get that kind of production out of star running back Ezekiel Elliott, who began the season with a 69-yard effort and the team's only touchdown.

"I've always enjoyed the NFC East rivalries," Shurmur said. "All the teams have great tradition. After last year, now all the teams have Super Bowl trophies, and this is one of the tougher divisions year in and year out.