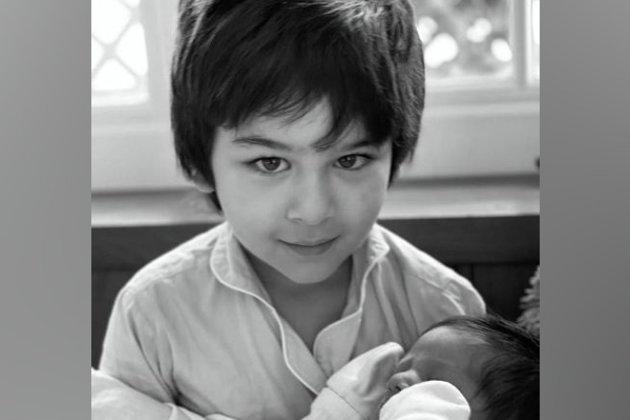 New Delhi [India], May 9 (ANI): Celebrating Mother's Day with her little munchkins Taimur and her newborn baby, Bollywood actor Kareena Kapoor Khan on Sunday shared an adorable picture of the brother-duo with a hard-hitting caption on social media on the occasion of Mother's Day.

Kareena took to her Instagram handle and shared a monochrome picture which sees Taimur holding his little brother in his lap while posing for the camera.

Giving a shout-out to all the mothers on Mother's Day, the actor penned a message alongside the snap where she expressed how her two sons keep her hopes alive in these unprecedented times of the COVID-19 pandemic.

"Aaj ummeed pe poori duniya kaayam hai, (Today the whole world rests on hope) and these two give me hope... for a better tomorrow. Happy Mother's Day to all you beautiful, strong mothers out there... Keep the faith..." she wrote.

Celebrity followers including Kareena's sisters Karisma Kapoor, Riddhima Sahni Kapoor and more than one lakh followers liked the post on the photo-sharing platform within a few minutes of it being posted.

Kareena and Saif welcomed their second child, a baby boy on February 21 this year. The duo dated for a few years before tying the knot in October 2012. The couple welcomed their first child Taimur four years later on December 20, 2016.

On the work front, Kareena, whose last movie was 'Angrezi Medium', will next be seen in 'Laal Singh Chadha', co-starring opposite Aamir Khan. Helmed by Advait Chandan, the Bollywood flick is a remake of the Hollywood classic 'Forrest Gump'.