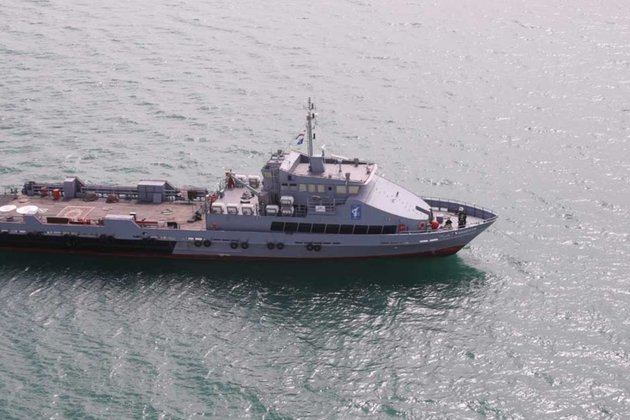 The British Navy reported the 'potential hijack' of a ship off the coast of the United Arab Emirates on August 3, days after a suspected Iranian attack on another tanker left two dead.

Iran's Islamic Revolutionary Guards Corps (IRGC) denied that its forces or allies were behind any incident off the U.A.E., which maritime security sources reported involved the Panama-flagged Asphalt Princess.

Any incident is an attempt by Western countries and Israel 'to prepare the public opinion of the international community for hostile action" against Iran, the IRGC said in a statement run on state media.

The incident was reported in an area in the Arabian Sea leading to the Strait of Hormuz, a crucial passageway for global oil supplies.

The United Kingdom Maritime Trade Operations, which is part of the Royal Navy, described the event as a 'potential hijack,' without elaborating.

The United States did not immediately blame Iran for the suspected hijacking, but State Department spokesman Ned Price said there has been 'a very disturbing pattern of belligerence from Iran."

'When it comes to this specific incident, it's too early for us to offer a judgment just yet,' Price told reporters.

Earlier on August 3, six commercial ships in the Persian Gulf updated their Automatic Identification System tracker status to "not under command," according to MarineTraffic.com. Such a status usually means a vessel has lost power and can no longer steer.

The apparent hijacking comes after Israel, the United States, and Britain accused Iran of involvement in the July 29 attack on the Mercer Street, a Liberian-flagged, Japanese-owned tanker managed by Israeli-owned Zodiac Maritime.

Iran denied any involvement in the attack on the Mercer Street, which the U.S. Navy said was carried out with a suspected drone in international waters off Oman. The attack left two crew members -- one British and one Romanian -- dead.

U.S. Secretary of State Antony Blinken, echoing comments from Britain, said on August 2 that there would be a collective response to the attack on the Mercer Street.

Tehran said it would respond swiftly to any threat to its security.

With reporting by Lloyds List, AP, AFP, and Reuters