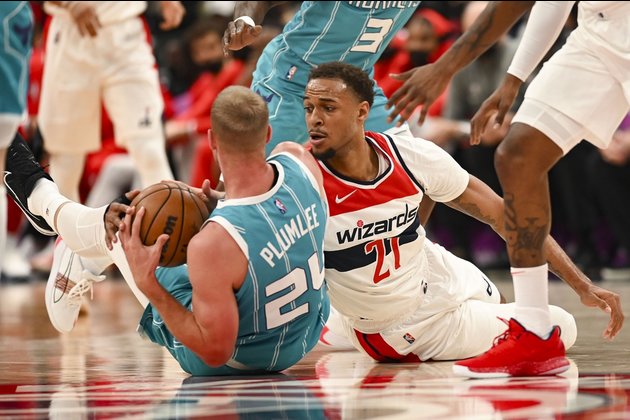 Terry Rozier scored 32 points for his second big outing against the Washington Wizards in less than a week as the visiting Charlotte Hornets won 109-103 on Monday night.

He had plenty of help from backcourt mate LaMelo Ball, who had 27 points and 13 rebounds as the Hornets avoided back-to-back losses.

Montrezl Harrell poured in 24 points on 10-for-13 shooting off the bench for the Wizards, who committed 18 turnovers and shot just 9-for-36 on 3-pointers.

So Rozier nearly made as many 3s as the entire Washington team.

The Hornets have won twice against Washington in less than a week, following Charlotte's 97-87 home victory.

The Wizards were aiming to win their fifth straight home game. It was just their second home loss of the season.

Charlotte began the second half by scoring 14 of the first 20 points, building its lead to 73-56. By then, Rozier was 6-for-6 on 3-pointers, though he missed on his next launch.

Later, Charlotte's 10-point lead shrunk to 97-93 with less than five minutes to play. Hayward responded with a 3-pointer to thwart the rally.

Ball scored nine of Charlotte's final 14 points of the first half. He finished with 17 points in the half.

The Hornets were good on 9 of 15 attempts on 3s in the first half, while the Wizards made only 4 of 17 shots from 3-point range before the break. Washington also had 10 first-half turnovers, but it was saved by a 29-18 rebounding edge at the midway mark.

WASHINGTON, D.C.: After officials in Washington D.C. admitted they could not explain the phenomena of UFO sightings, the U.S. government ...

After decades of work, Egypt to open 3,000-year-old Avenue of Sphinxes

CAIRO, Egypt: Egypt opened its 3,000-year-old Avenue of Sphinxes to the public this week, in a swanky ceremony, after over ...

SINGAPORE: Three months after Cambodia rolled out COVID-19 vaccines, just 11 percent of its population had received at least one ...

SEATTLE, Washington: In early November, the Olive Bay was docked in the port of Everett, Washington. Below its decks was ...

WASHINGTON D.C.: With agricultural costs being driven to new highs due to a shortfall of nitrogen fertilizer worldwide, farming communities ...

NEW DELHI, India: India will introduce a bill during the winter session of Parliament that could block the use of ...

PARIS, France: In protesting the UK's refusal to grant more licenses to fish in British waters, French fishermen said this ...

WASHINGTON D.C.: To encourage a drop in sky-high gasoline prices, President Biden said the Department of Energy will release 50 ...