READY ON SET: Behind the scenes at production day 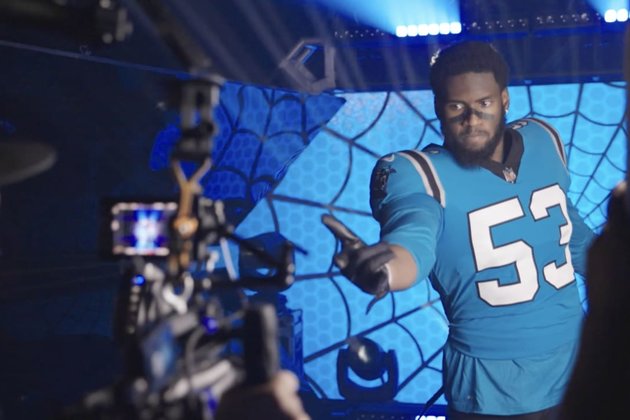 CHARLOTTE - Brian Burns stepped out of his locker room, and into a movie set.

Just inside the doorway of a previously industrial-looking space, blue lights beamed like lasers, and a host of cameras prepared to capture the cinematic scene.

Flashes of bright light coupled with Panthers' logos and curated details for players created an atmosphere reminiscent of a major studio production or a rock concert. The Panthers were the stars of the day, posing, shouting, and shooting smiles toward the lenses as bass-heavy hip-hop music blared in the backdrop.

Behind Burns, a black spider web rotated on a blue screen as he reached down in front of a camera. The Panthers' pass-rusher channeled his inner superhero as he replicated a pose from his childhood favorite, Spider-Man.

"That was the hardest background I've seen in a long time," Burns said, clearly impressed. "It's just amazing, all the things they can do with the Spider-Man thing. It's pretty much a dream come true."

"Spider-Burns" was one of the elements included in Carolina's annual production day this year, when players rotated between photo and video sets. The content harvested over the four-day event will be seen throughout the season - on the scoreboard during games, during preseason broadcasts and television shows, and on the team's social media channels. There are also the player introductions for network broadcasts, which are shared for use throughout the year.

And pulling it all together is, in fact, a production.

After Charlotte FC's nationally broadcast game with New York Red Bulls on Saturday, June 11, four ESPN trucks rolled out of the production bay at Bank of America Stadium, and a crew came in to begin assembly of the sets. Ten workers arrived Saturday night at 9 p.m., and worked through the night until 5 a.m., hanging trusses and rigging and laying down the floor. After a four-hour break, another crew of 30 more workers came back for another 12-hour day to get it all ready, putting up lighting, an LED wall, and setting up the cameras and smoke machines to make it look the way it did. There were also camera sets and a green-screen room to capture footage beginning Monday morning, when players arrived.

There were around 50 people working Monday, many of them on the scene hours before defensive tackle Derrick Brown became the first player on the set at 6:15 a.m.

It's a lot of logistics to get to the point players can go station-to-station in full uniform (with the team's PR department instrumental in keeping things moving on schedule), but being part of such a scene also leaves room for some wide-eyed wonder, with a few players capturing some behind-the-scenes footage for themselves.

"It can be kind of a drag getting everything set up and getting everyone in the right place," senior director of game presentation and production Mike Bonner said. "But once they're in the room, they're like kids again."

Burns called this year's production day the best of his career. As he heads into his fourth NFL season, Burns said he's grown more comfortable being himself in front of the production day cameras, though he admitted to feeling some nerves before his first one in 2019.

But some rookies, like Charlotte native and first-round pick Ikem Ekwonu, appeared camera-ready in their first go-around, as Ekwonu showed off the "Ickey shuffle" and was smiling throughout the process.

A jovial atmosphere floated across the bay and adjoining rooms, which were transformed to include a traditional video studio, an area illuminated by LED light tubes, traditional photography sets for head shots, and the glowing blue laser light set for videos and photos.

Running backs Christian McCaffrey, Chuba Hubbard ,and D'Onta Foreman flexed between the LED lights. Defensive veterans Shaq Thompson, Jeremy Chinn, Donte Jackson, and Myles Hartsfield jumped in to hype each other up with roaring yells - a sound that echoed through the loading dock, startling people passing by.

Frankie Luvu danced for the camera. Taylor Moton spiked a football, as he has been known to do. Sam Darnold and Pat Elflein recreated the family photo from the "Step Brothers" movie poster. Burns linked up with Yetur Gross-Matos to show off a teammate handshake in front of the green screen - showing off personality to build the season's in-game experiences.

"It takes you away from football for a minute just to have fun," Burns said. "You show your personality on camera. It's pretty cool, and it was really a dope set that they did in the loading dock area."

For second-year wideout Terrace Marshall Jr., the lights and camera flashes signal the season is growing closer. Just a few weeks separate the Panthers from training camp in Spartanburg, and the fun on a set means the work on the field is on the horizon.

"Personally, I like it," Marshall said. "Because it's letting me know that we're getting ready for the season."

OTTAWA, Canada: Over the next six years, Canada will spend $4.9 billion Canadian (US$3.8 billion) to modernize its aging military ...

NEW DELHI, India: The European Union and India have relaunched talks to implement a free trade agreement, aimed to be ...

MOSCOW, Russia: Russia's consumer price index has fallen by 0.12 percent for the third consecutive week.This drop in the consumer ...

TAIPEI, Taiwan: The American Chamber of Commerce in Taiwan has recommended that the United States "urgently" initiate talks with Taiwan ...

NEW YORK, New York - Stocks on Wall Street and around the globe rallied hard on Friday pushing the major ...

HONG KONG: To cope with the weakening property market, developers in China are coming up with innovative ways to attract ...