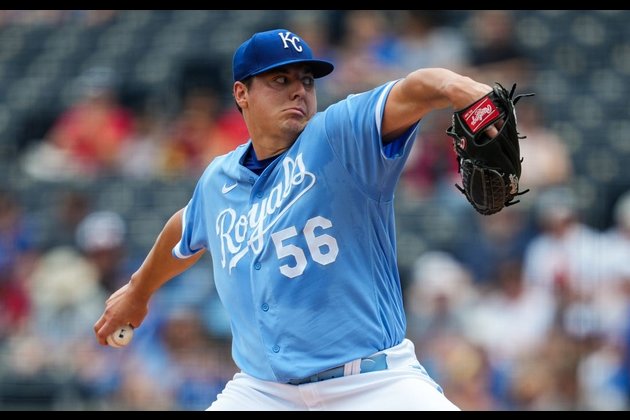 Once more unable to notch their first three-game home winning streak of the season, the Chicago White Sox will again aim for a reset Tuesday as they continue a three-game series against the Kansas City Royals.

Host Chicago out-hit Kansas City 10-6 Monday, but nine of those hits were singles. TheWhite Sox stranded nine men and finished 0-for-5 with runners in scoring position en route to a 2-1 defeat.

The defending American League Central champions are .500 -- both through 102 contests and in the first four contests of a six-game homestand against scuffling Oakland and Kansas City.

The Royals have won two straight, as Salvador Perez and Whit Merrifield provided the offense Monday with solo home runs. Perez has homered three times in four games since returning to the lineup following thumb surgery.

Nicky Lopez added two hits for Kansas City, which could have shortstop Bobby Witt Jr. back in the lineup after he missed Monday's game with hamstring tightness.

White Sox right-hander Lucas Giolito (6-6, 5.14 ERA) will aim to continue his steadiness against the division rival Royals as he gets the call. Giolito, who is 8-4 with a 3.44 ERA in 18 career starts against Kansas City, is coming off a no-decision at Colorado on Wednesday, when he spaced three runs and six hits in five innings.

Giolito took a no-decision in his lone start against the Royals this season, scattering two runs and seven hits in five innings on May 18.

Kansas City will turn to right-hander Brad Keller (5-11, 4.18), who contributed a quality start on Wednesday against the Los Angeles Angels but took the loss. Keller scattered three runs and six hits in six-plus innings with three walks and five strikeouts.

Keller pitched into the seventh inning for the 10th time in 18 starts this season, rebounding after allowing five runs in four innings of a July 22 loss to Tampa Bay, his first start following the All-Star break.

"I was pretty happy to get that far (Wednesday), especially after having a shorter one my first time out of the break," Keller said. "I wish I was able to bear down to get even more outs."

In 18 career appearances against Chicago, including 15 starts, Keller is 5-5 with a 3.34 ERA. Tuesday marks Keller's third start against the White Sox this season. He had no-decisions in his first two starts, pitching seven innings both times while allowing a total of four runs.

Tim Anderson, Eloy Jimenez and Andrew Vaughn each had two-hit games for Chicago on Monday, with Jimenez extending his hitting streak to a career-best seven games.

However, added punch is unlikely to come from center fielder Luis Robert, who is unlikely to rejoin the White Sox during the series, manager Tony La Russa confirmed Monday. Robert hasn't played since leaving a July 15 game at Minnesota with lightheadedness and blurry vision.

Robert was held out of games Saturday and Sunday at Triple-A Charlotte with cold-like symptoms. Overall, La Russa said Robert's condition is improving.

"Still gets some symptoms. Being careful with him," La Russa said. "He is getting better. So, our fingers remain crossed."

Citing safety of children, LA to move homeless away from schools

LOS ANGELES, California: During a meeting that was disrupted by protesters this week, the Los Angeles City Council voted to ...

WASHINGTON D.C.: The U.S. Justice Department announced this week that former Puerto Rico governor Wanda Vazquez has been arrested in ...

OTTAWA, Ontario: Military trainers from Canada will head to the United Kingdom to teach Ukrainians new techniques for fighting the ...

LOS ANGELES, California: Since early May, Charlie Hamilton has not irrigated his vineyards with water from the Sacramento River, despite ...

YANGON, Myanmar - Honeys Holdings, a Japanese clothing retailer that manufactures much of its product line in Myanmar, has decided ...

NEW YORK, New York - U.S. stocks rose sharply on Wednesday despite the latest reading that inflation in the United ...

WARSAW, Poland: Julie, who preferred not to give her full name, booked a group of trips to Warsaw last year, ...

SYDNEY, NSW, Australia - Stocks traded lower in Asia on Wednesday. Technology stocks were the hardest hit, and the exchange ...