No. 5 Clemson faces BC, looks to extend win streak 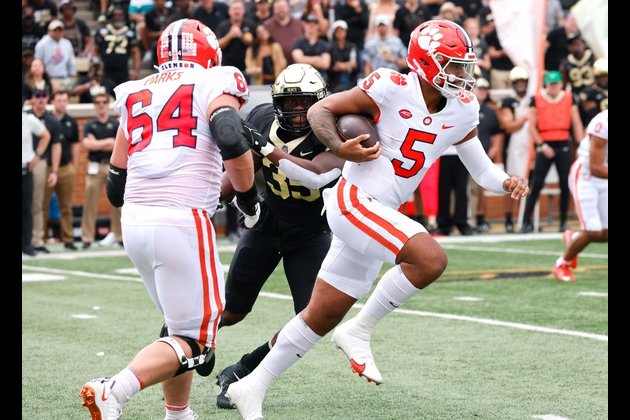 No. 5 Clemson will play its third consecutive Atlantic Coast Conference game and will try to extend the nation's longest active winning streak when the Tigers travel to Boston College on Saturday night.

Dabo Swinney's team has scored at least 30 points all but once during the winning streak after using a balanced attack against the Wolfpack. Clemson quarterback DJ Uiagalelei threw for 209 yards and a touchdown while rushing for 73 yards and two scores.

"Good players have consistency in their performance regardless of who they play against," Swinney said. "It was a big night for him. ... He puts a lot of stress on defenses with his legs. You can see his arm talent. There's no part of the field that he can't attack with his arm. ... It's been fun to see him each week just get better and more confident."

Uiagalelei entered Clemson's top 10 in career passing yards (4,402). He also has rushed for at least 50 yards in three straight games.

The junior will compete against Phil Jurkovec of Boston College (2-3, 1-2) after Jurkovec's 304-yard passing effort in Saturday's 34-33 win over Louisville.

Jurkovec hit Zay Flowers (151 receiving yards) for two of his three TD passes while freshman Alex Broome ran for a touchdown as part of a 144-yard rushing attack as the Eagles overcame three turnovers and a five-point deficit after three quarters.

"I think we did a pretty efficient job (protecting Jurkovec) most of the day, but it can be better and it needs to be better because the team we're playing is one of the best in the country," Eagles coach Jeff Hafley said.

Saturday marks Boston College's Red Bandana Game in honor of Welles Crowther, a 1999 graduate who died in the terrorist attacks on Sept. 11, 2001, and was credited with saving at least a dozen lives in the Twin Towers in New York City.

"You've got the No. 5 team in the country coming in (for the) Red Bandana Game, nationally televised on ABC," Hafley said. "I expect it to be a great atmosphere."

BC hasn't defeated Clemson since 2010, when the Eagles produced a 16-10 home victory.

Despite the Tigers winning the past 11 meetings, Swinney said: "Boston College is always one of the toughest teams we play. Every year. I have a ton of respect for this program, their coaches."

BC tight end George Takacs, left guard Finn Dirstine and cornerback CJ Burton were all injured against Louisville. Their status for Saturday is still unknown, though Burton practiced Tuesday.

"Everything is great, but they got a protocol in place for him," Swinney said. "So they're going to condition him this week and just push him every day. Started that (on Monday)."